Barbera – it’s the quintessential Italian red. From the north-western region of Piedmont, where the Barbera grape is the most widely planted variety, its succulence and sour cherry flavors leave you craving a plate of the region’s hearty cuisine.

Up until the 1980s it was the people’s wine, a mainstay on any peasant table, a simple wine made to be drank locally, and sold by the cask. But today, something has changed. A glass of Barbera can ask premium prices in chic wine bars in New York, London and Sydney.

In the mid-1980s, thanks to the intuition of some producers, a radical transition revolutionized Barbera. First, Giacomo Bologna carried out the first trials of aging in wooden barrels, then Arturo Bersano began experimenting with labels. Barbera, traditionally a wine drank young, discovered a newfound potential to age.

“In the 1980s, for the first time, producers started looking outside of Italy, new techniques were introduced in winemaking, and the television began to present agriculture in a positive light,” said Daniele Chiappone, producer from the Erede di Armando Chiappone winery. Today, Barbera finds itself able to compete with other Piedmontese internationally recognized wines.

In 2014, the creation of the Nizza DOCG appellation was another milestone in this transformation. The Nizza Monferrato municipality in province of Asti is a historical area for Barbera production. Previously, Barbera made here could be produced as part of the Barbera d’Asti Superiore (subzone Nizza) appellation.  Now, simply Nizza will refer to Barbera produced within this zone according to a new production protocol, including the use of 100% Barbera grapes and a minimum of 18 months aging, including six in wooden barrels.

The Nizza appellation is fruit of several decades of work carried out by the producers to give value to this unique, biodiversity-rich area. “We wanted to do with Barbera from Nizza what Barolo and Barbaresco have done, to give value to the territory, not just the grape variety,” said Paolo Avezza, small-scale vigneron. “The terrain, climate and microclimates all create a unique wine. Even five kilometers down the road you will get a different Barbera. As the French say – terroir.”

The result? A wine of incredible freshness, elegance and purity. A wine that no longer just finds itself on farmhouse tables the year after harvest, but one that can age splendidly up to 15 or 20 years. A simple wine, but never dull. 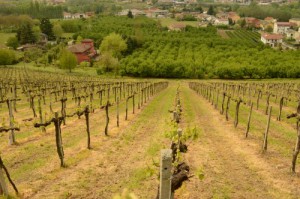 “In coming together to create the Nizza appellation, for the first time we producers started to talk to one another,” said Daniele Chiappone. “Now, whether big or small, we talk and share information. This has been the true miracle of Nizza.”

On April 19, Giro del Nizza, an open day at selected wineries in the Nizza Monferrato area, was organized by the Slow Food Piedmonte e Valle d’Aosta convivium, giving the chance for Slow Food members to discover the local viticulture.