Monica Castagnero, 28, one meter and sixty centimeters of determination, at once combative and active, skips about in a pair of size 36 Converses. After graduating and working in the marketing sector, she has now thrown herself into a new adventure. For just over a year, in fact, she has been collaborating with her family at their brewery, Birrificio Castagnero, in Rosta, between Turin and the mountains of the Susa Valley.

Situated in the shadow of the Sacra di San Michele, a mountaintop abbey, the tiny brewery (the heating plant has a capacity of just 250 liters) is an emblem of craftsmanship. The boiling plant and the fermenters were handmade by Monica’s dad, heating is monitored visually and the beer is bottled exclusively by hand.

It’s an agricultural brewery and the malt arrives directly from the family’s fields. “We began producing barley in 2013 before launching the brewery. A gamble within a gamble. The harvest varies year by year according to seasonal weather conditions, so the color of the malt, hence of the beer, is never the same. The end product is less standardized than others, but this is what makes it truly unique, ours and ours alone. I know where it comes from and how it’s produced.”

«Woe betide anyone who dares to criticize my beer. I treat it as if it were a child of mine,” explains Monica, “but I realize I’m growing up, so I often get experts to taste it. One thing’s for sure, though: if I’m not satisfied with the result, the beer doesn’t leave the brewery and I’m not prepared to sell it. Luckily we’re not looking to turn out large quantities, so we can afford not to be in a hurry to grow and to do our best to evolve and improve.”

The brewery is already producing numerous beers: a blonde ale, a red ale, a copper ale, two India pale ales (IPAs), and a hemp beer produced in collaboration with Assocanapa, the  hemp growers’ association in Carmagnola. “Beer is changing all the time, and we never stop experimenting. We start off with our own malt and my favorite hops, but we’re always trying out new ideas. The recipe for the blonde ale has changed four times, the one for the IPA has varied three times out of three. But I’m sure the moment will come in which we’ll find the perfect balance,” continues Monica, who is enjoying the busy pace of the life.

“I never stop and I’ve had to learn the ropes in the field,” says Monica. “I graduated in economics and did a master in marketing, both subjects far removed from the brewing world. Now my life is divided between the business and constant tasting all round Italy. At every festival and fair we’re on the lookout for new cues for success. Vice versa, sometimes it’s other brewers who taste my beer and give me precious advice. ‘Learn a trade for a rainy day,’ as they say.” Monica doesn’t need to be told that twice.

Monica has inherited all her passion from her dad, Andrea: “My father began homebrewing five or six years ago. Everyone mistakes the old man, the real heart and soul of the brewery, for Don Bosco. Look at the photo we use as a symbol for the brewery and you’ll see why. It was he and a mate of his who built the whole heating plant and the fermenters. He’s the true genius loci and he’s now the chief critic of our beers. He makes the final judgment on the flavor of all our new products.” 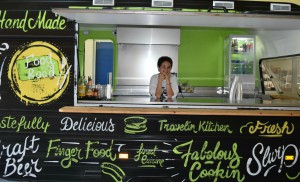 So it’s all in the family? “The idea of embarking on this enterprise came from one day to the next. After completing work on the brewery we restructured three old caravans and converted them into food trucks that now do the rounds of festivals all over Italy. This is all organized by my sister Elena, who’s 30. We are starting to have fun. We’re sisters and we can tell each other what exactly we think without any qualms. We have a rapport that doesn’t crack easily. Without her I wouldn’t be able to sell beer, not even to someone dying of thirst,” Monica confesses. The latest member of the team is Mattia Soster, who is studying on the Advanced Apprenticeship course at the University of Gastronomic Sciences in Pollenzo.”

Castagnero’s is a beer rooted in its local area. “My beer is pure Rosta because half the town’s involved in making it. The farmers help me to work my fields of barley with machinery that I can’t afford, and even the meat we use for the hamburgers on the food trucks comes from the town’s butchers. We believe in this productive philosophy and now we want to promote it conscientiously, without being afraid to open out to the world and its ideas. Who knows, maybe I’ll pick up winning ideas from some young German, Belgian or America I might meet in Milan at Terra Madre Giovani,” Monica concludes with a smile.

Monica will be participating in Terra Madre Giovani – We Feed The Planet taking place at Expo 2015 in Milan from October 3-6.
www.wefeedtheplanet.com