About 150 kilometers north of Italy’s world-famous wine-making regions of Barolo and Barbaresco, another exceptional Nebbiolo-based wine is made, one that has never acquired international — or for that matter, national — fame. In the village of Carema, in northern Piedmont near the Valle d’Aosta border, a wine of the same name has been made since the 1400s on the dramatic landscape of terraced vineyards.

Carema’s quality has been recognized as far back as the 15th century, and it was a favorite among popes and cardinals in the courts of Savoy. By the early 20th century, the wine was an important resource for the village’s inhabitants, representing one of their major sources of employment and wealth, as well as a symbol of the community’s identity. The village was known as a “paese vigneto,” a vineyard village, because pergola-trained grapevines grew all around the houses and filled the gardens and courtyards.

Carema’s distinctive vineyards are planted on terraces lining a natural amphitheater, which rise from 300 meters to 600 meters above sea level. The terraces make the soil on the steep slopes cultivable and prevent erosion. Growers have introduced a method for training for the vines that is well suited to the environmental characteristics: the pergola system, with a framework of beams often supported by pillars.

Apart from holding up the whole pergola system, the truncated cones of stone also have another important function: The stone absorbs heat during the day and releases its warmth overnight, helping maintain a milder microclimate among the vines. In the past, this training system was designed not only to store heat, but also to make the most of the space, with vegetables grown underneath the pergolas. The village is still home to a handful of laborers who know how to maintain this cultivation system; vineyards are managed manually with knowledge that has been acquired over centuries.

The wine’s characteristics come from the terroir, the grapes—a specific clone of the Nebbiolo variety which has adapted to the local conditions—and the winegrowers’ work. On the nose, Carema is subtle and fresh, with floral and mineral notes; on the palate it is elegant, with dense tannins and great aromatic persistence. The grapes ripen less compared to further south in Piedmont, so it is less powerful and more acidic than Barolo or Barbaresco. The color is fairly orange, distinguishing this mountain wine from other Nebbiolos. All the grapes are vinified locally and the wine falls under the Carema DOC appellation which allows only grapes grown within the Carema municipality. 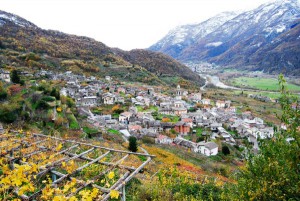 Despite its exceptional quality and illustrious past, today Carema is facing a very real risk of extinction. Grape-growers grapple with a host of difficulties as they practice this heroic mountain viticulture. Management of this type of plot normally requires four times more manpower than a normal vineyard and yield is not high. The labor-intensive cultivation combined with sale at inadequate prices has meant that younger generations are no longer interested in taking on the challenges. In fact, the average age of a grower is 60.

In 2014, the Slow Food Foundation for Biodiversity created a Presidium for Carema, a project to protect endangered traditional products by working directly with producers. The Presidium aims to promote Carema’s traditional viticulture, protect its rural landscape and safeguard its biodiversity. It brings together all the viticulturalists who have committed to adopting sustainable agricultural practices: practices that respect the environment, as well as the health of the wine drinker. It aims to favor direct sales to ensure better returns for producers and allow the direct contact with consumers to restore the producers’ pride in this remarkable product.