Necessity is the mother of invention. History books (and grandparents) tell us about the hardships of twar, where, as often happens in times of conflict, it is the land and those who work on it to sustain those who’ve gone into battle.

During World War 1 it wasn’t uncommon for farmers to lose whole harvests and the contents of larders and cellars at the hands of some hungry army. As legend has it, in the northern Italian region of Veneto, it was this very situation–as well as the pragmatic and unwavering ingenuity of farm workers–that gave birth to the tradition of formaggio imbriago (drunken cheese). In an attempt to hide their cheeses, local farmers in the area around the River Piave would hide whole cheeses in the residue left over from grape pressing. In doing so, they discovered that not only did the cheese keep for much longer but also that the aromas of the pomace gave the cheese a whole host of new flavors.

Today the method has revived much of the old tradition, adapted and refined based on the results of trial and error over the years: the cheese ages for a period of six to eight months on wooden boards, then it is left to mature for several months, the number of which varies depending on the production, in vats of local wine must, which determines the cheese’s qualities.

To ensure that the cheese adopts only the best features from each wine, the wine is replaced regularly throughout the ripening period. As well as imparting the characteristic aromas and flavors of the wine used, this gives the rind its distinctive color, which ranges from yellow to very dark red, or even purple. The cheese, on the other hand, retains a light, off-white color and is rich with fruity, spicy notes and the intensity instilled by the must.

Over the years this production method has spread beyond the northeast to other parts of Italy, such as Piedmont and Campania, and this month finds itself at the center of a workshop at Slow Food’s Cheese event, to be held in Bra, Italy later this month. 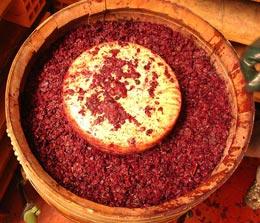 The workshop will include tasting of: Braciuk, a traditional product from Bra (Piedmont) made by combining Bra Tenero DOP cheese and Barbera, Nebbiolo, Pelaverga and Cabernet pomace; Baronerosso® di capra, made from goat’s milk cheese and Barbera d’Asti DOCG pomace. From Campania we have Ubriaco Arimei from Ischia, which is matured with four varieties of dried grapes. But the lion’s share, as you might expect, comes from Veneto, which boasts Ubriaco di Recioto, a cow’s milk cheese matured in dried Recioto di Soave pomace, and of course Ubriaco di Raboso, which is very closely linked to Raboso pomace, a grape variety from Piave where it all began.

Find out more at cheese.slowfood.com