First, there are the natural wine fanatics, who will drink only and exclusively natural wines. They couldn’t care less about the smell, the brettanomyces, the acidity or the many other problems that can affect the wine to which a normal drinker would turn up their nose, for them is the ultimate. In fact, they don’t taste with their mouths and noses, but with the idea of naturalness. Faced with a non-natural enological masterpiece, they speak with scorn and disdain, as though it were an act of blasphemy.

The gourmands, ones who on the other hand, care only about the taste of a wine regardless of the methods of production used or whether the wine has a sense of place, was produced without chemicals, or adheres to a traditional profile.

There are the technology crusaders, for whom technology reigns king; if it exists, it must be used. Otherwise why do we have it? Without fail, they are mediocre and superficial tasters. They kneel down before large-scale, super-technological wineries, and they have little time for small-scale producers with few technological means. Listening to them explain the virtues of technology is akin to a nauseating screech, like nails on a blackboard. 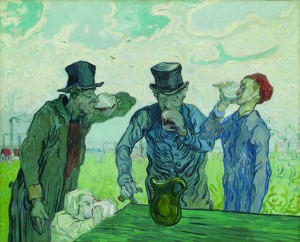 Then there are the endearing ones, those that seem as though they fallen by chance into the world of wine tasting, and in which they move somewhat clumsily, without ever being sure of their own judgment. They latch onto those who they believe know more, and maybe every now and then sneak a look at their neighbor’s notes. I have a soft spot for them, and often, through perseverance, they gain confidence and skill.

There are the super-experts, who know everything there possibly is to know about wine in every corner of the world. This category further divides into two sub-types: First is the haughty super-expert, who looks down on you, or perhaps doesn’t even acknowledge you at all if you’re not part of the club, and struts past as though he or she were an aristocrat amongst commoners. The other type is friendly, helpful and nice, shares knowledge and ideas, but in the end feels at home only among similar people.

And finally, the old timers, those that have drunk so much wine in their not-so-short existence that they’ve been left slightly dazed. Often they rouse compassion, sometimes embarrassment, sometimes depression (Is this how I’ll end up?) but all in all they’re harmless, even if they steal the places of those that are younger and more skilled than themselves.

Of course, I write in jest, and don’t mean to offend. The wine world wouldn’t be what it is without the cast of colorful characters that inhabit it.