Scandals in recent years regarding the exploitation of migrant workers in Italian agriculture– orange harvesters in Calabria, apple pickers in Trentino and the so-called ‘tomato slaves’ in Puglia and Sicily living in squalor and paid poverty wages–have shone the light on modern forms of slavery. Unfortunately in southern Piedmont, just a few kilometers from the home of Slow Food, we’ve discovered forms of exploitation we didn’t think existed in a sector of agricultural excellence, that of winegrowing.

The Langhe and Monferrato, the two main winemaking zones of the region of Piedmont in northwest Italy, would grind to a standstill if it weren’t for Macedonian immigrants. Their presence is enormous—and essential–both in the permanent workforce of the wineries and in cooperatives, which supply a large part of the work in the fields during the summer months.

The investigation we carried out was not intended to discredit or criminalize the cooperative systems. Rather the objective was to shed light on the issue, because if fundamental honorable mechanisms collapse, then Piedmontese, and even Italian viticulture, also risks failure.

The majority of producers and cooperatives abide by the law. However, we have discovered through interviews with winegrowers, recorded conversations and photographs, that workers are routinely exploited, earn starvation wages, and rely on compatriots who had arrived earlier and act as middlemen, making money off their recruitment.

It all began with a telephone call from a producer: “You at Slow Wine wave a flag for environmental sustainability, but why aren’t you interested in what’s happening to foreign workers in the vineyards?” After three weeks of investigations, contacting various producers in the Langhe and Monferrato and following the breadcrumbs left by their stories and confessions, we’ve come to three conclusions.

1)   Workers are paid a pittance

Having set up a meeting under a false name with the director of a cooperative considered decent and from the timetables that a winegrower showed us, we know that the official hourly wage of a laborer in a cooperative is €10/hour plus VAT.

The same “decent” cooperative told us off the record that we could pay €8 under the table. Some producers let us know that if the winery is large and requires a lot of work, they can get down to €6. An ex-cooperative employee revealed that Macedonian workers earn €6/hour if they are experienced but just €4 if they are novices.

2)   Piecework is the system of choice

Paying workers a fixed piece rate for each unit produced regardless of time is undoubtedly the most commonly used formula by wineries and cooperatives. For example, in May when canopy management takes place, payment is calculated based on the surface area completed. The rate is €120 euros for 3,810 m2. One producer we questioned admitted that the same task performed by his official employees would cost €800. This is no small difference!

This formula permits more room for maneuver because it is concerned only with the final result. The winery doesn’t get involved, isn’t required to carry out checks, and isn’t responsible for anything other than the results. Laborers are even required to work during the hottest periods of the day, between 12 pm and 3 pm, which causes numerous cases of fainting in the vineyards. Those who faint are “kindly” repatriated and never called back.

Piecework also allows greater room for maneuver on the part of the cooperative, because it assumes the business risks but is able to squeeze its “members” even more, slashing the salary even further. When workers are paid under the table this amount is lowered to just €3/hour and, in Sicily, sometimes €2.50.

This kind of work is mainly carried out by the illegal teams of the cooperative, including Macedonian workers holding tourist visas. These groups operate mostly on weekends, when the risk of checks by authorities is lower. On Saturdays and Sundays from April to June, you can see big groups of workers in the vineyards in the Langhe and Monferrato. 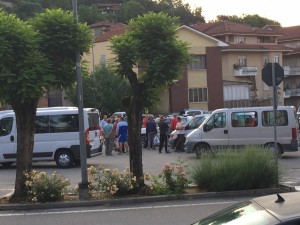 Loading Macedonian laborers for work in the vineyards
at 6.30 am in the main square of a town in Barolo (Langhe)
June 2015. @Giancarlo Gariglio

3)  Legal and illegal coexist in a twisted system

This underworld created over time involves different players who collaborate to increase the traffic of unskilled labor. There are legitimate cooperatives, structured and with permanent offices, which have two different tariffs: on the books (€10 plus VAT) and off (€8 or less). Pay is by the hour or per unit produced, on the basis of the type of work requested.

There are smaller cooperatives, harder to identify and offering even lower wags (€6 or less). Then there are the caporali (recruiters of illegal day laborers) who work for other cooperatives and so understand the demand for unskilled workers. They hire their own compatriots for very short periods, often organizing their journey to Italy. Payments are off the books and fall as low as €3/hour, even for a ten-hour shift. These caporali sometimes supply the unskilled workers to legitimate cooperatives and earn a fee as a result.

The trafficking of these modern-day slaves includes the provision of a bed in an overcrowded room for €200/month. The “tourist” package also includes transport between Macedonia and Italy at fixed price of €70 return.

One of the producers in the Langhe, who occasionally uses cooperatives, said, “If Report [the Italian news television show] ever came to the Langhe, everything would break down, because it’s truly revolting.”

There are three adjectives that we are particularly fond of: good, clean and fair. That food and wine should taste good, that their production shouldn’t harm the environment, and that their producers should work in fair conditions and receive decent pay. The latter has the same weight as the first due; it’s not an optional extra on the bottom rung. Just as the people who create the wines we love shouldn’t be either.